You are here: Home

A Day in the Life of the Women Weavers of Kumaon

Nestled in the foothills of the Himalayas lies the Kumaon region of Uttrakhand, North India. This area is home to the tribal villages of the Johari Botiyas, whose women traditionally wove beautiful handlooms whilst the men engaged in trans- Himalayan trade with Tibet.

The skills of the handloom having been lost for almost a century are now being revived by the womens weaving project 'Panchachuli', bringing employment and empowerment to hundreds of women as well as economic and social progress to the region, as 'Door to the Himalayas' found out when Bronte Philips joined one of the Panchachuli weavers on a visit to her village home.

It is late afternoon after a 10am - 5pm day weaving in the workshop, when Asha invites us to visit her and her family. We rush down the slope to catch the company bus, the ladies still knitting as they skip down the dirt path. There are about 30 other ladies on the bus along with our translator as we are driven for part of the way down the steep hills, the snowy peaks of the Himalayan ranges facing us. We pass the brightly coloured, scattered convenience stores, children, goats and cows. It is a novelty for Asha to have visitors, she explains, telling us about her 45 minute walk to work each day. Aged 41, this is a trip Asha has been making for 15 years. But the part of the journey traversable by bus is short, and, getting off at our stop, we begin to make our way through a small opening in the roadside bushes, climbing down a long, steep, dirt track surrounded on either side by lush green vegetation, the smell of fragrant Himalayan rhododendron bushes and rough pine, observed by the occasional monkey or two.

Soon the houses begin to come into view across the staggered fields, in which Asha explains wheat is being grown. She beams, "my husband" in proud appreciation of her husband's work, who farms the fertile land we see around us, providing the wheat for the staple roti bread. Skirting the crop stages, Asha's smiling face gestures to a pretty blue house on the slope of a hill, a building not disimilar to a quaint provencal farm house. 'It is 50 years old' she tells us, as we trip around the wild coriander, 'and home to two families'; not least her own four children, of whom now only one girl remains and is hoping to become a teacher, the other two happily married. Her son is away at university studying for a BTEC. Asha is justifiably proud of her childrens' achievements.

Hopping up the steps and over a small bridge between houses the family cow looks up and blinks contentedly as we are eagerly introduced to the rest of the large extended family who are now gathered around. Our generous host rushes inside to prepare the local speciality, sweet rhododendron juice, as the father-in-law's sister crouches on the top step. We notice a rather huge curved knife tucked into the back of her saree, a sign that she has been working the fields - a hard, traditional life, leaving its mark on the scorched faces of the older generation. Returning, Asha talks chattily about her time as an experienced weaver at Panchachli, of how the project began: the founder going from house to house in the foundation's early days, encouraging the women to come along and learn the weaving skills, despite resistance from some reluctant husbands to let their wives gain employment. Asha explains how with her skills she has made many journeys, teaching her knowledge in villages as far away as Bhutan and Nepal, not to mention in other areas of India. As I look through the photo album of her trips with 'Panchachuli', I catch a glimpse of her husband standing beside her, beaming proudly.

When the time comes to leave, we all hug and we disappear up the hillside tracks, not quite so quickly as we had appeared. Every so often I see their brightly coloured sarees and waving hands in the distance, their laughing voices still ringing in our ears.

'Door to the Himalayas' has selected a fine range of the traditional, hand-woven Kumaon design shawls and scarves from Panchachuli. 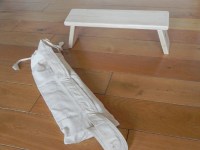 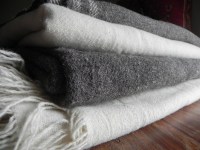 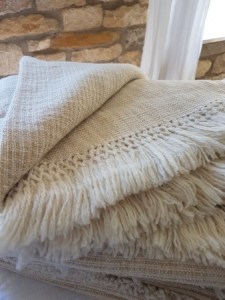